The Common Brushtail  and Ringtail Possums

They are protected in Australia. This is not so in New Zealand where they were introduced in 1840 from Australia and are now decimating forests.

Its prehensile black tail, with leather-like strap underneath, helps grip branches for climbing. It has very sharp claws.

The brushtailed possum is the size of a domestic cat - 35 to 55cm, with a tail of 25-40cm. It can weigh up to 4.5 kilograms, with males generally larger than females.

It is nocturnal and lives to about 13 years of age in the wild. 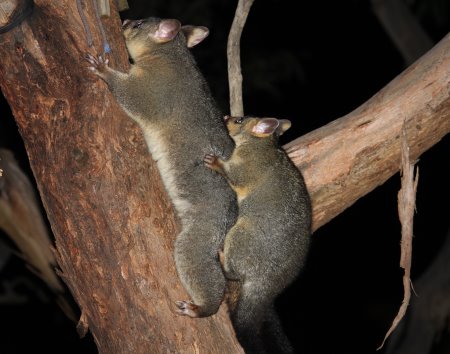 The possum is very territorial and marks its territory with a secretion from a gland in its chest (as do koalas).

If relocated, it generally does not survive.

To communicate it makes a low throaty chattering noise.

Its habitat is along the eastern coast of Australia, inhabiting forest, grassland, and scrub land where it lives in hollows in trees.

Much to the chagrin of homeowners, it will also inhabit roof cavities.

The brushtailed possum is a herbivore, eating eucalyptus leaves but also flowers, seeds and fruits.

It can decimate gardens in urban areas, where it is generally hated!

Breeding can occur any time of the year but peaks in spring (September to November).

The brushtailed possum mates randomly – it does not have a life partner.

The gestation period is about 17 days, with only one young.

As with all marsupials, the young climbs through the mother’s fur up into her pouch and attaches to a teat.

The young remains in the pouch up to nearly 6 months, and then rides on its mother’s back for up to 9 months. By this stage it is quite large. 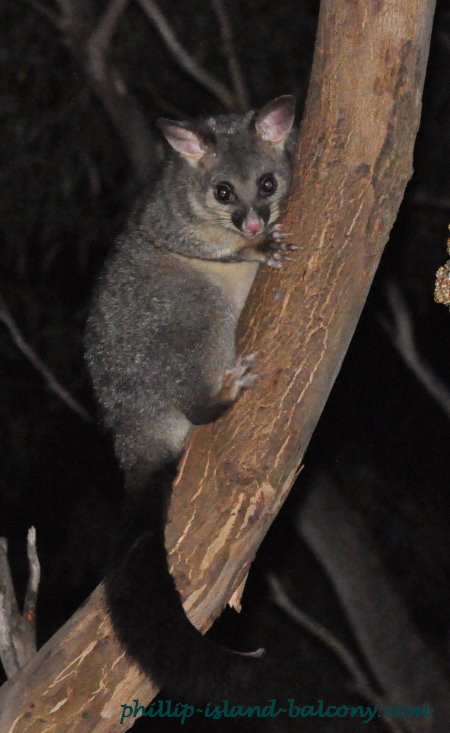 With light grey fur, white patches behind the eyes and on its tummy, and white tip on the last quarter of its thin tail, it is a very pretty marsupial.

Its slightly bulging eyes are distinctive.

The tail is prehensile to help it climb, and jump between branches.

The ringtailed possum's range is from the top of Cape York down the eastern coast of the Australian mainland to Tasmania.

Its habitat is in forests, woodlands, scrub, as well as urban areas.

Nocturnal, it makes a nest, called a drey, from leaves, small branches and shredded bark, where it sleeps during the day.

It can also live in tree hollows. 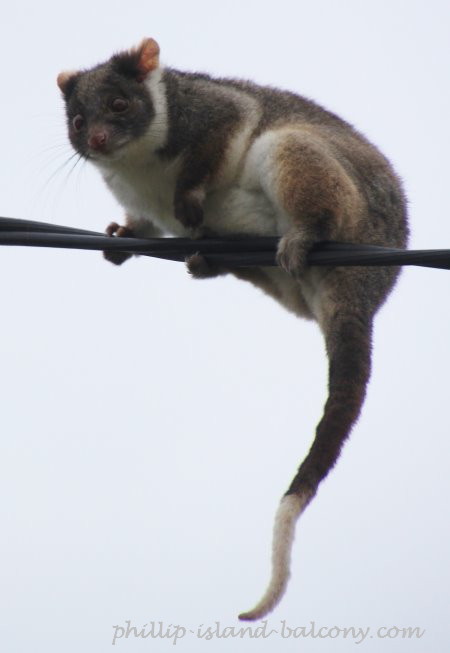 The ringtailed possum's diet includes leaves, fruits and flowers. It will also eat its own faecal pellets to obtain maximum nutrition.

Breeding is any time between April and December, with young born between May and July.

Gestation is 28 days and usually two young are born.

They leave the mother's pouch at around four months of age but still continue to drink their mother's milk. 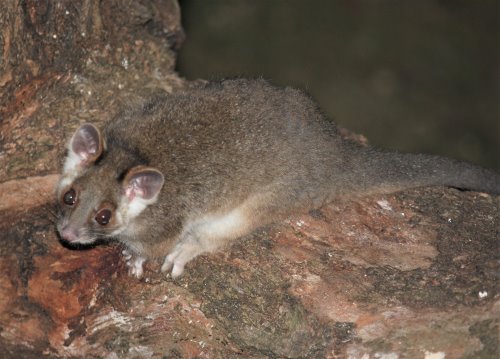 The common brushtailed and ringtailed possums are affected by deforestation.

Predators include humans, dogs, the introduced fox, and the goanna, plus cars and dogs in urban areas.

In the northern tropical areas, they are prey for carpet snakes.