The island is fortunate to have as residents and visitors, two wonderful species - the Australian Fur Seal and the Southern Right Whale.

Australian fur seals can be viewed all year round at Seal Rocks, while southern right whales arrive only in winter.

With the little penguin and koala, the Australian fur seal completes the "big three" of Phillip Island wildlife. 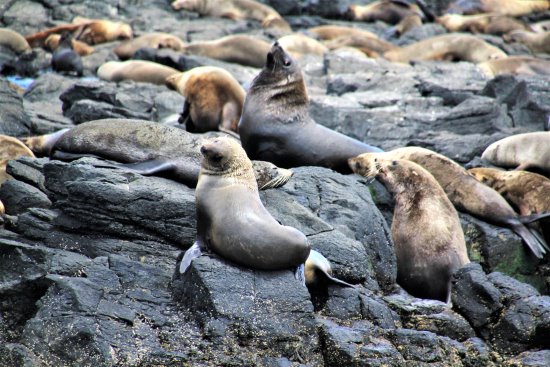 Just past The Nobbies at the westernmost point of the island, Seal Rocks has Australia’s largest colony of fur seals, with a population of 10-12,000.

Their ideal habitat is rocky shores and ledges (apart from the sea of course!).

As well as Seal Rocks, you occasionally spot them swimming in the channel between Phillip Island and the mainland.

The Australian fur seal is the fourth-rarest seal species.

It was almost hunted to extinction until hunting became illegal in 1891 and seal colonies recovered.

They are now protected.

Australian fur seals can dive to a depth of 130 metres and feed mainly on squid, octopus, cuttlefish and local small fish species.

Females are smaller, weighing around 100kgs and growing to about 1.7 metres. They can live up to 21 years.

Females give birth to one single pup, milk feeding up to 10 months. They mate again soon after birth.

Although sharks take some seals, man is the major predator.

As well, commercial fishing is reducing the seals food supply.

To observe them in their natural habitat, take a boat cruise from Cowes to Seal Rocks with Wildlife Coast Cruises.

Telescopes are available at Point Grant, site of The Nobbies Visitor Centre.

Or bring your binoculars to watch the antics of this engaging Phillip Island marine mammal! 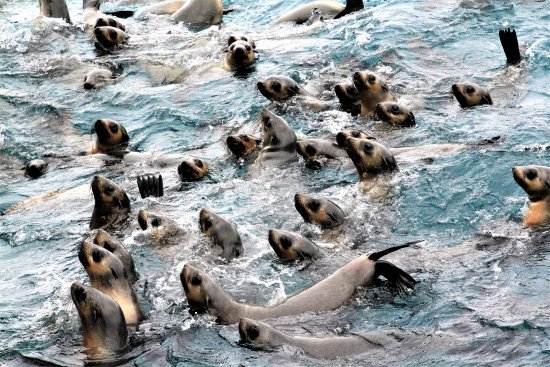 Whales migrate from Antarctica during the southern hemisphere winter months. As the Antarctic waters start to become cold and icy, they set out, the females already pregnant. 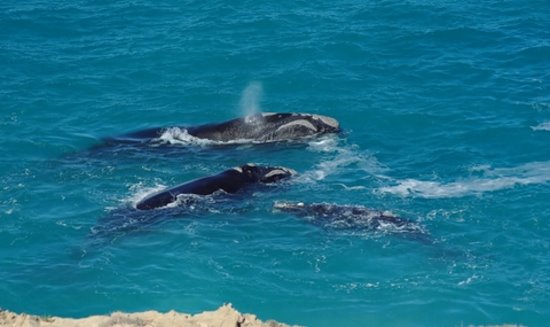 The Humpback whale (average length 15 metres) arrives in Australian waters around April/May and heads up the east and west coasts to the warmer water along the Queensland and Western Australian coasts. Here they calve.

The Southern Right whale is a bit slower off the mark and arrives in our waters around May/June.

The southern right whale was so named because it was the right whale to hunt, as it moved slowly and would float after being killed.

The best time to see the whales along the Phillip Island coast is from June until early August, with July the peak viewing time.

A surfacing humpback can be distinguished by a single "blow" - the spurt of steam from the lungs which condenses in the cold air to appear like water.

Southern right whales have two blowholes and the blow is v-shaped.

The best whale watching spots on Phillip Island are The Nobbies, Pyramid Rock and Cape Woolamai. 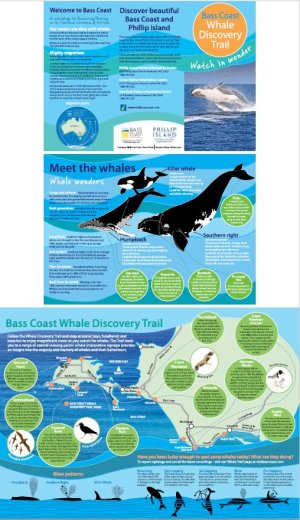 The southern right prefers cooler water so stays along the southern coast of Australia to calve. They tend to come closer to shore than the humpback, making for better viewing opportunities.

Like the humpback they average about 15 metres in length. Due to hunting, their numbers have dwindled and only a few hundred visitors come each year.

Their main destination is The Great Australian Bight but some calve in the waters off the South Australian and Victorian coasts.

Although humpback whales are the most common whale seen off Phillip Island, followed by Southern Rights, the island is also visited by killer whales (orcas) and the occasional blue and minke whale. 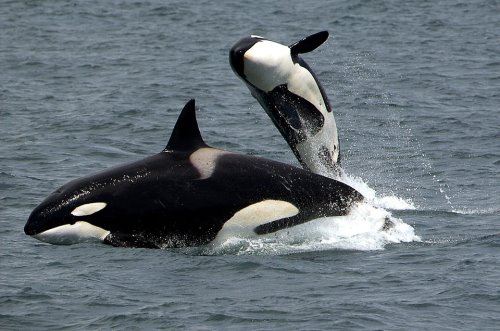 Dwarf minke whales can often be mistaken for dolphins as they move quickly and their dorsal fin can look like a dolphins.

A visit from a pygmy blue whale depends on the availability of food.

Each winter there are lots of sightings of these majestic Phillip Island marine mammals - from the shore or from helicopter flights available at Phillip Island Airport or cruises from Cowes Jetty.

It is illegal for boats to be closer than 200m from a whale or 100m from a dolphin. Jetskis must not be within 300m to any of these creatures. 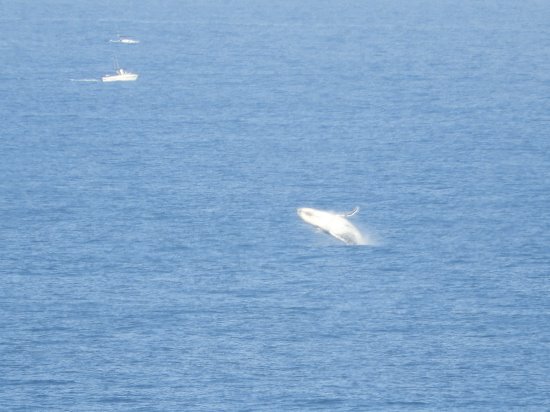 Dolphins are often seen on Wildlife Coast Cruises, either on their Seal Rocks Cruise from Phillip Island, or Wilsons Promontory Cruise.

Most sightings are the Common Dolphin, although there are also Bottlenose Dolphins in Westernport Bay.

Common Dolphins have a distinct hourglass light grey to yellowish pattern on their side. They usually swim in pods and love to ride the bow of the boat, much to the excitement of cruise passengers!

The main prey of the Common Dolphin are squid and small school fish such as sardines, pilchards and anchovies.

As with whales, the dorsal fins of Common Dolphins can be used to identify individuals.  Each dorsal fin has a unique shape, arrangement of notches, colour patterns and scars.

Common Dolphins can be found on the continental shelf throughout temperate and tropical waters worldwide. 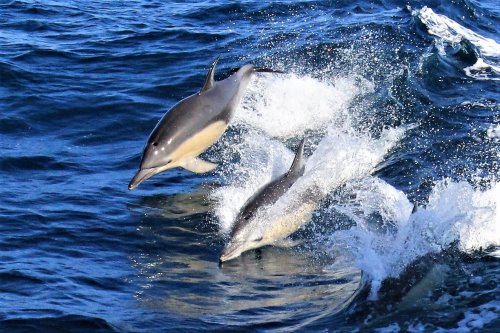