Phillip Island Bird Watching - From Balcony to Field and Sea

Phillip Island birdwatching from my balcony is a delight.

Banksia, acacia, tea tree and sweet bursaria provide food and shelter for a diverse range of birds in and bordering my garden. 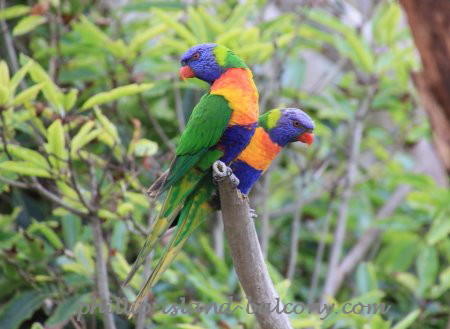 Rainbow lorikeets, one of Australia's most brightly coloured parrots with green, yellow/orange and blue plumage and bright red beaks, chatter and squawk in the banksia and eucalyptus trees. Always in pairs, their raucous chatter fills the air.

On hot days they rest in the outer branches and quietly twitter among themselves, sometimes affectionately "necking" or preening.

Apart from seeds, they eat pollen, fruit, blossoms and insects.

The brightly coloured Eastern rosella eats the seed pods of the wattle tree.

A more timid member of the parrot family is the galah.

Usually seen resting on electricity wires, or on the ground getting seeds from grasses, they are infrequent visitors to my garden.

They lovely pink and grey plumage makes them one of Australia's most beautiful birds.

We are privileged to have an occasional visitor, the yellow-tailed black cockatoo.

Flying in squadrons like World War II bombers with slowly flapping wings, they like to rest in neighbouring banksia trees. 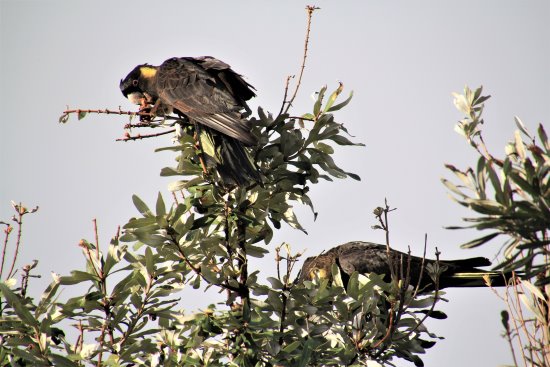 Although small, New Holland honey-eaters, with their striking black, white and yellow plumage, make up for it in noise!

Late summer afternoons I hear their loud calls as they assemble in trees. Then they swoop down for a swim in the bird bath.

Early on summer mornings they can be seen drinking nectar from agapanthus flowers. In spring they feed on the blossom of banksia, grevillea and eucalyptus.

They also feed on insects, darting from branches and catching prey on the wing. 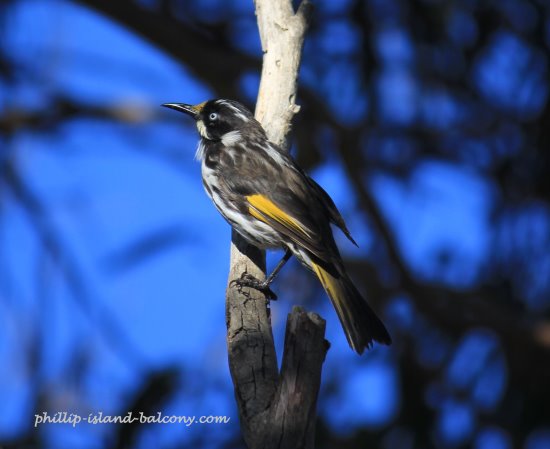 A common visitor is the little wattlebird, a member of the honey-eater family. Their harsh cry is a common sound in the evening garden.

Apart from insects, it feeds on agapanthus and banksia nectar. A rarer visitor is the red wattlebird, although it is generally common in southern Australian gardens.

Other small honey-eaters and sparrows shelter in the sweet bursaria and prickly Moses trees.

In summer and winter, birds love to drink and bathe in my bird bath.

Late on a hot summer afternoon the joyful racket can be amazing! 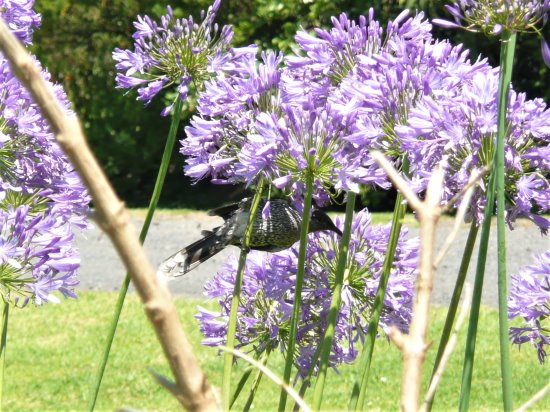 There are over 300 species of birds on Phillip Island.

Their habitat is the coastal heath land of banksia, tea tree, acacia, grevillea and eucalyptus and low shrubs.

When flowering, nectar and pollen from these trees and shrubs attract birds and insects.

For many, Phillip Island birdwatching focuses on one of my favourite birds - the Cape Barren goose, which is unique to Australia.

Once faced with extinction, they are now abundant on Phillip Island, although are listed as vulnerable. 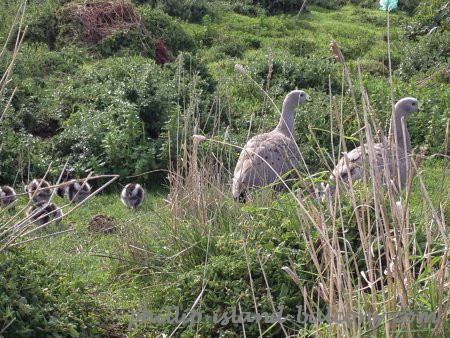 Another common bird is the sulphur-crested cockatoo. Their raucous screeching can be heard a long way away, a flock making a deafening noise.

Their main food is seed from grasses and plants.

They screech and raise their yellow crest in an aggressive manner if approached.

The kookaburra, king of the bush, can often be heard laughing. Its preferred food is the larvae of insects found under tree bark. 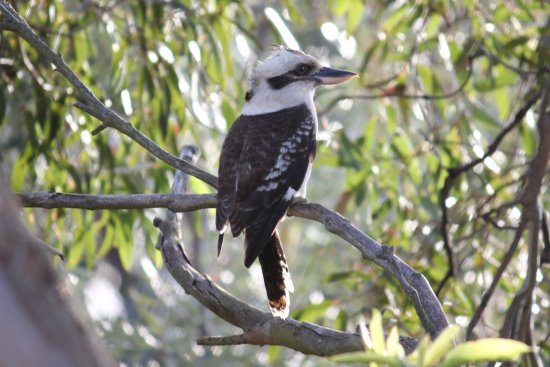 The Kookaburra - King of the Bush

Another common bird is the magpie, with its black and white plumage. Listening to their carolling in the early morning is a delight.

Males have a more distinct colour, with females and young having more grey.

Sometimes mothers and babies rest on our balcony rail before alighting to drink from the bird bath.

One of the most common bird cries heard on Phillip Island is from the plover (masked lapwing).

They are often seen in pairs in fields or along roadsides feeding on insects or seeds. During nesting season and after the eggs are hatched plovers are very aggressive.

Be wary of them swooping down at anyone who comes too close. The young are very cute with their spotty feathers. 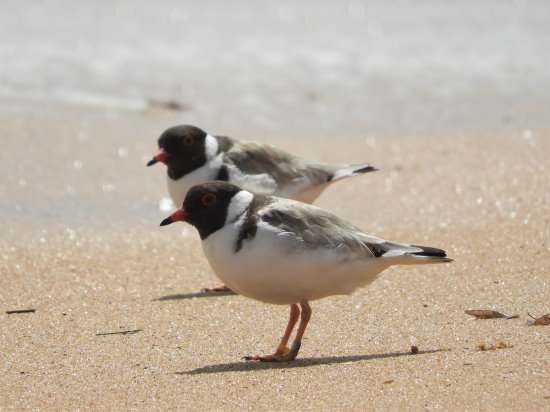 Phillip Island bird watchers and residents are active in protecting the hooded plover. This species is endangered on the island due to animal and human activity.

On some beaches you may see areas fenced off for their protection. Where signed, please protect this habitat, particularly during nesting and hatching.

They are found on wide sandy beaches with plentiful seaweed, and adjacent to dunes. 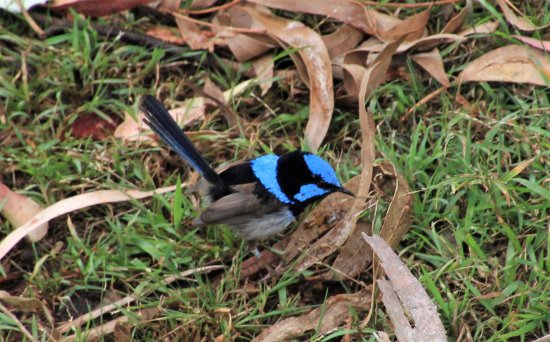 Blue and brown wrens can be seen at the Koala Conservation Reserve and also along Phillip Island's walking tracks, especially from Pyramid Rock to Berrys Beach. They can be easily heard as they flit among the low coastal shrubs. 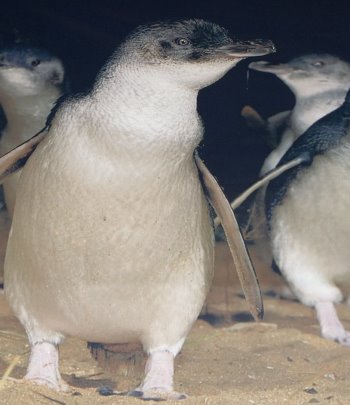 The most famous of Phillip Island birds is the Little Penguin, Australia's only resident penguin.

One of Australia's most popular tourist attractions is the nightly return of the little penguin to the colony at Summerlands Beach on the southern coast of Phillip Island.

Silver gulls and Pacific gulls inhabit the coastal area. A prime breeding site for the silver gull is at The Nobbies next to the visitor centre. 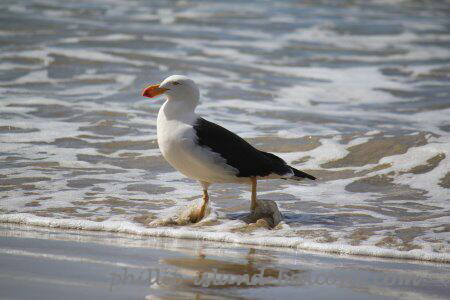 Walking along the shore at low tide, bird watchers can see the sooty oyster catcher or white faced heron fossicking among the exposed rock for food. 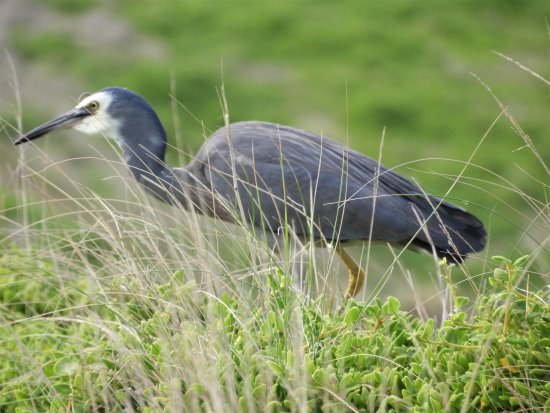 Swan Lake is the only fresh water lake on Phillip Island. Walk along the peaceful wooded path to the two bird hides which overlook the lake.

Here you can enjoy some wonderful Phillip Island birdwatching. The lake is the home to black swan, purple hens, egret, ibis and ducks.

The walk is worth it even when bird numbers are low.

In the woodland, spot a shy swamp wallaby grazing or perhaps an echidna is out for a stroll.

Enjoy the daily pelican feeding at San Remo on the mainland, near the Phillip Island bridge.

These huge birds can grow up to nearly two metres tall. Watching them tossing a fish around in their big pink beaks to correctly position it before swallowing, is a delight.

On Phillip Island they are common but can mostly be seen at Rhyll Inlet, and the Fisher wetlands, on the road to Churchill Island.

They also sun themselves on jetties - especially those where the fishermen clean their fish! 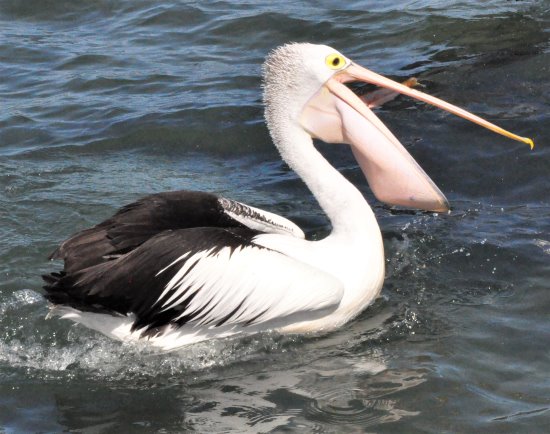 One of the great bird migrations of the world is the annual migration of the Short-tailed Shearwater.

As well as resident waders, some species migrate from northern and central Asia to this area every year.

At Rhyll Inlet, a Ramsar-listed area, Phillip Island birdwatching is enhanced by the world's southern-most mangroves.

These attract a myriad of water birds, including migratory species such as eastern curlew, bar-tailed godwit and whimbrel, which fly 12,000 kilometres from their breeding ground in Siberia.

Rhyll Inlet mudflats teem with molluscs, shrimps, crabs and worms. When the tide is out, watch the small crabs scurrying around.

Park at Conservation Hill on the Cowes-Rhyll Road and follow the walking track along the path to the wooden walkway over the mangroves.

For a longer walk, follow the path to Rhyll where you will have great views over the inlet. 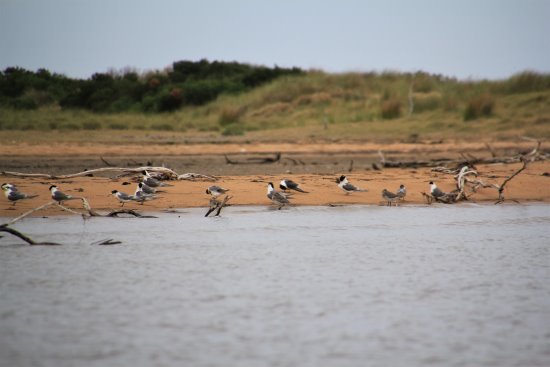 The southern coast of Phillip Island is the habitat of the short tailed shearwater.

The sandy dunes and clifftops, covered with binding grasses such as hairy spinifex and Bower spinach, are a perfect place to build burrows.

The short tailed shearwater annual migration is one of the great bird migrations of the world.

The best places to see hovering raptors are Cape Woolamai and on the South Road between The Nobbies and the Penguin Parade Visitor Centre.

I have spotted Peregrine falcon, brown falcon, kites and the huge wedge-tailed eagle. 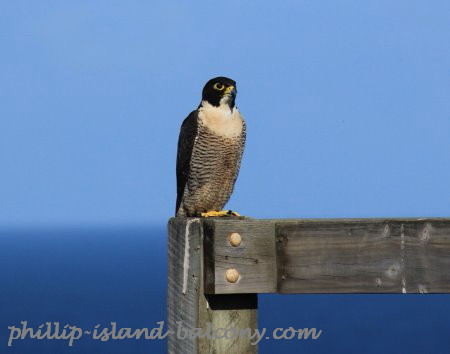 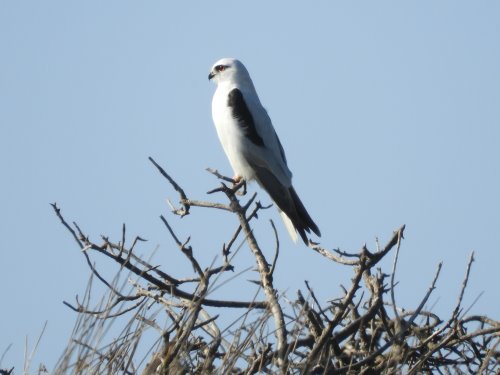