Do you know Australia’s first dinosaur was found at Eagles Nest near Inverloch in 1903?

Named The Cape Paterson Claw, it was discovered by Scottish geologist W H Ferguson. This claw was from a meat-eating dinosaur and was the first evidence that dinosaurs occupied Australia.

Recently I took a tour to the Inverloch Dinosaur Dig Site. 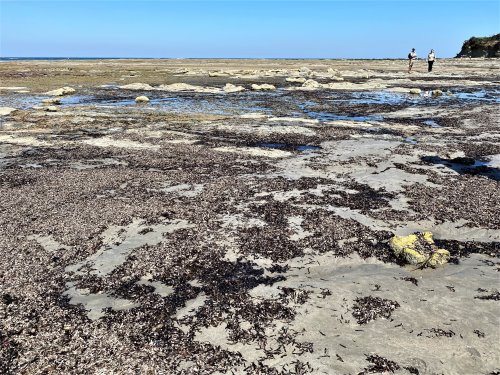 We met at the Bunurong Environment Centre in the middle of Inverloch. The tours run at various times, mainly school holidays and long weekends.

Our tour guide was Mike Cleeland, teacher and palaeontologist, and he has been involved with dinosaur hunting for many years, here at Inverloch and at Cape Otway. He found a dinosaur jaw with teeth in the 1990, which is named after him and Lesley Kool of Wonthaggi – Koolasuchus cleelandi.

In January 13, 2022, Koolasuchus cleelandi was adopted as a fossil emblem for the state of Victoria.

At the centre, there are displays of fossil specimens found in the area. Visitors can watch a video showing the times when dinosaurs roamed this area, which amazingly, started as part of Antarctica.

There is a plaster cast of the large dinosaur footprint found at Flat Rocks in 2006.

Fossils can be found along the Bass Coast from San Remo to Inverloch. 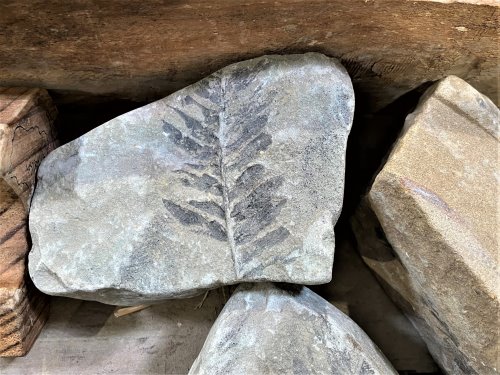 After the introduction at the centre, we drove to Flat Rocks, 3 kilometres from Inverloch. Dinosaur hunters need a low tide and good weather conditions, which we had.

The Flat Rocks area was formed 125 million years ago.

At the Inverloch dinosaur dig sites there are four main types of rock – sandstone, mudstone, conglomerate and dolerite.

Fossils found in this area (around 15,000 so far) are thought to have been washed down in a flood as no complete skeletons have been found. The fossils come from several dinosaur species, fish, turtles, mammals and birds.

A volcanic dyke and surrounding rock contain visible pieces fossilised wood, and we spent time searching for other fossils.

Near the base of the cliff, there is a part of a fossilised tree which would have been alive at the time dinosaurs roamed the area.  After an unsuccessful search for dinosaur footprints in the flat rock, we headed back to Wallace Reserve in Inverloch. 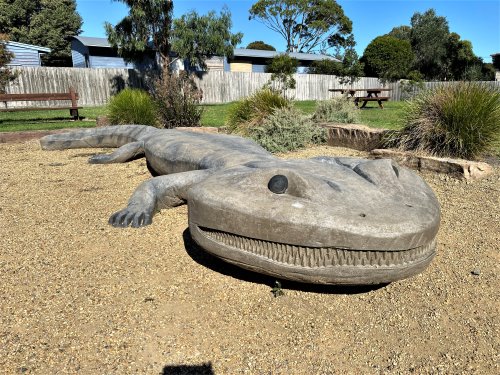 At Wallace Reserve there is a full-size replica of Koolasuchus cleelandi – it is about the size of a large crocodile. Mike had brought many small rocks which we broke apart with picks, looking for “dinosaur food” – fossilised leaves, seeds or grasses. Some of our group were successful in finding fossilised leaves and ferns which they were allowed to keep.

For the keen, 100 metres north of the stairs at The Caves, 6 kilometres from Inverloch, the above-mentioned dinosaur footprint can be seen in the rock shelf.

The Inverloch dinosaur dig tour is a wonderful introduction to dinosaurs, especially for children as there is a lot of hands-on activity.

The coastline is constantly being eroded by sand and surf, so there are always new discoveries waiting to be made.

Perhaps there will be a dinosaur named after you! 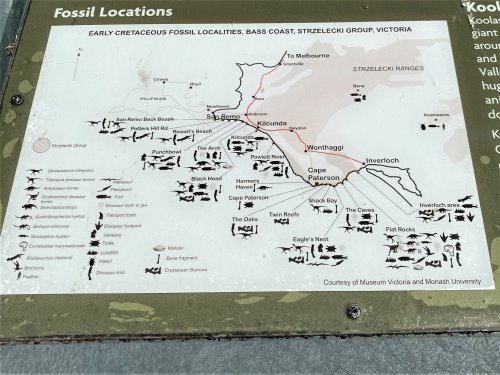