A Wilsons Promontory Cruise is now offered by Wildlife Coast Cruises, well known for their cruises to Seal Rocks at Phillip Island.

The Prom cruises are generally on selected days in February, March, April and October.

We left Cowes on Phillip Island at 6.45am which makes for a long day. If you have a car, a good idea would be to stay in the Foster area the night before and maybe visit other attractions such as Agnes Falls near Toora, the day before the cruise.

Or you could arrange to be picked up by the bus. The day we did the cruise the bus stopped at Inverloch, Foster and Fish Creek to pick up passengers. But the bus will stop at other towns along the way. Arrange this with Wildlife Coast Cruises.

After the early start with the two hour bus trip from Cowes to Port Welshpool, we boarded the cruiser Kasey Lee at 9.00am. The number of passengers is capped at 60 so we could freely move around, sightsee and take good photos.

Our Wilsons Promontory Cruise was blessed with a fine day although overcast to start with. By midday the cloud had burnt off and we had a beautiful sunny autumn day. 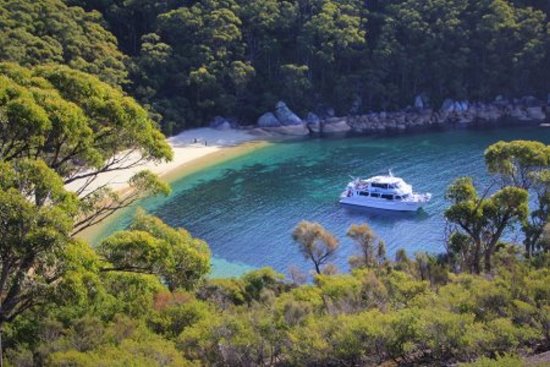 The Kasey Lee at Refuge Cove on the Wilsons Promontory Cruise

During the cruise our captain gave a commentary on the history of the area plus information on the birdlife and wildlife.

Morning and afternoon tea was provided, with day long tea and coffee available.

We headed out through the Lewis Channel past the Port Welshpool Long Jetty.

This interesting structure was built between 1936 and 1938, using yellow stringy bark from Woodside, about 50 kilometres to the east. Originally 850 metres long, it was extended to 908 metres in 1982 to service the oil and gas industry in Bass Strait.

Built for the coastal shipping trade (and between Tasmania and the mainland), it was also used for the Bass Strait fishing industry and as a base for mine sweepers during and immediately after World War 2.

The jetty is among the longest remaining wooden jetties in Australia.

Cruising slowing through the channel and in the calm waters of Corner Inlet, immediately we see lots of birds including black swans, Pacific gulls and cormorants.

A seal also popped up behind us as it fished the area.

Passing Driftwood Beach, obviously named for the number of dead branches washed up along the sand, we spot a wedge-tailed eagle, surveying the landscape from a dead tree. 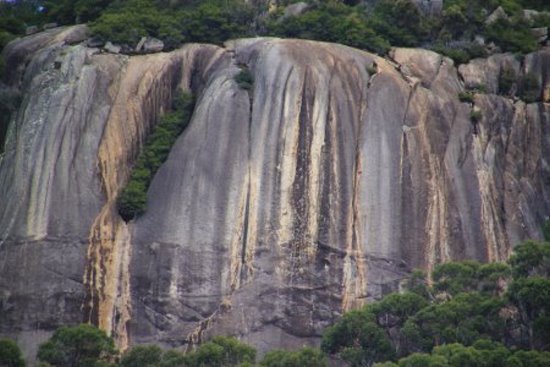 Soon we begin to see the rugged granite foundations of the area. Huge granite rock faces appear between vegetation. Enormous boulders are strewn along the shoreline. It is a photographer’s delight with so many shapes and colours!

We see small enticing bays and inlets with glimpses of lovely sandy beaches. Later, on our return to Port Welshpool, we will stop at Refuge Cove.

One of the larger coves is Sealers Cove, used by sealers from around 1800 until the 1830’s when the decline in seal numbers in the colonies near Wilsons Promontory made the industry not viable.

In the background are the peaks of the Promontory – Mt Latrobe, Mt Wilson and Mt Ramsay among smaller ones.

The Kasey Lee rounds South East Point above which sits the Wilsons Promontory lighthouse. Built from local granite in 1859 to protect shipping in Bass Strait, the lighthouse has a range of 33 kilometres. It became automated in 1993.

To experience the lives of lighthouse keepers, visitors can stay in cottages at the light’s base.

Next we pass South Point, the southernmost point on the Australian mainland.

We stopped for lunch in calm waters between the Prom and Wattle Island. A delicious buffet of roast meats, salads, and dessert were served by the hard working crew.

I had advised Wildlife Coast Cruises that I was a coeliac and required gluten free food. They were fully aware of what I could or could not eat and I enjoyed a lovely meal.

By now a few passengers suffered sea sickness but were assiduously looked after by the Wilsons Promontory Cruise crew. I tend to sea sickness myself so had brought a supply of ginger tablets. Plus I spent nearly all the cruise at the back of the cruise boat where there is less rocking motion. 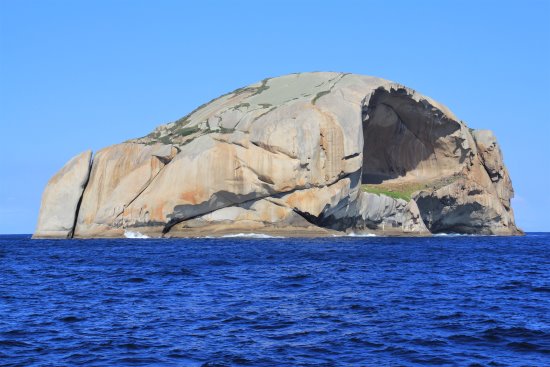 After lunch we started the next part of our Wilsons Promontory cruise and headed for Cleft Island (part of the Anser Group), a granite island mostly referred to as Skull Rock. As we approach it definitely looks like a skull with forehead, eye socket and nose. On one side is a huge cave with a grass floor, probably carved out by the sea in ages gone by. Around the waterline is a fringe of seaweed which sways like a hula dancer in the waves.

From Skull Rock we went to Kanowna Island to visit a colony of Australian and New Zealand fur seals. The seals climb high up the granite rock faces which must be very difficult with their tiny flippers! There they doze in the sun or play. To re-enter the water they almost slide out of control down the rocks and into the water.

Sharing the rocks are flocks of crested terns. 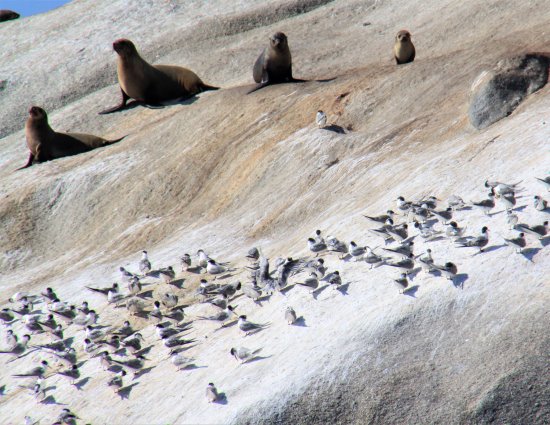 For most of the cruise an immense pyramid-shaped rock, Rodondo Island, is visible on the horizon. Although so close to Wilsons Promontory and Victoria, this island is actually part of Tasmania.

So I could say the Wilsons Promontory Cruise almost takes passengers interstate!

Motoring back up the east coast, the captain spotted some dolphins off the side of the Kasey Lee. He slowed the engines and soon they were leaping along beside the boat and then positioning themselves under the bow in what seemed to be a very daring race!

They were clearly visible under the water as we raced along. We could also hear their high pitched chatter to each other. More and more joined in with a passenger counting over thirty dolphins, although some may have gone around more than once!

The dolphins were the Common Dolphin, although Bottle-nosed Dolphins are sometimes spotted as well. 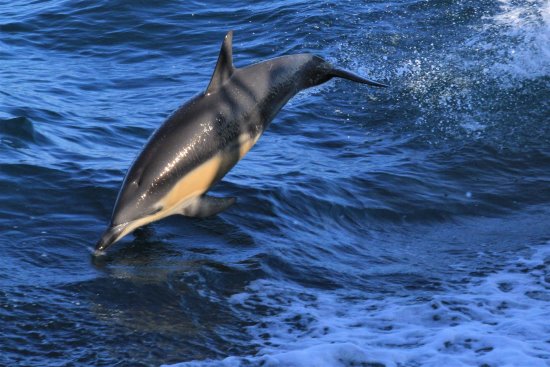 After racing for some time the captain increased speed and we left the dolphins behind. We calculated they could swim at around 20 kilometres per hour! This was a very special sighting and a highlight of the Wilsons Promontory cruise.

Around us gannets dived to catch fish and two gulls followed in our wake for quite a distance before peeling away.

The Kasey Lee stopped at Refuge Cove, a beautiful bay with lovely golden sand beaches. The dinghy was lowered and we went ashore. Swimming is also an option in the summer months. It’s hard to imagine the cove as the busy whaling station it was in the mid 1800’s.

There is time for two short walks as we stay for two hours. We first walked through the camping area and up to a rock face overlooking the turquoise water of Refuge Cove. The other walk is to Refuge Cove North, about 20 minutes one way. Here we found sea glass and a beautiful pink sea star on the beach. We were the only visitors apart from one hiking couple, but no doubt during the summer it would not be so secluded.

This was a lovely break after so much time on the boat – a chance to get some land legs back!

Back on the Kasey Lee, we headed back to Port Welshpool, a two hour journey. Being April, the sun was setting with an orange and red display over the peaks and ranges of Wilsons Promontory.

We had cruised over 100 kilometres of pristine, stunning coastline.

Passengers enjoyed a glass of wine, nibbles and conversation which was a perfect end to this wonderful Wilsons Promontory Cruise.