I have wanted to do the Wildlife Coast Cruises Twilight Bay Cruise for a while, especially to see the submarine near Hastings – more on that later!

Our cruise will take us on a clockwise circumnavigation of Westernport Bay. 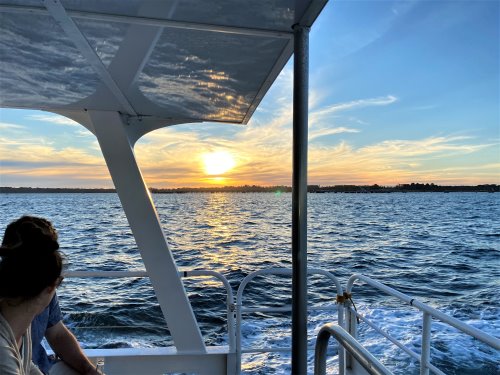 The Kasey Lee slows as we approach Sandy Point, which is part of HMAS Cerberus Naval Base. It is therefore off limits - as the frequent signs along the foreshore show. The base covers land from Sandy Point up to Stony Point and Crib Point on the Mornington Peninsula. Its primary role is as a training base.

Seals and dolphins are regular sightings on the Twilight Bay Cruise but sadly we don’t see any on this trip. We do see flocks of sea birds resting on the spit near Sandy Point.

Past Stony Point, we see HMAS Otama, an Oberon Class submarine built in Scotland and commissioned into the RAN in 1978. Its main role was surveillance and intelligence-gathering.

HMAS Otama was replaced by the Collins-class submarines and de-commissioned in 2000. It was sold to the Western Port Oberon Association and brought to Westernport Bay from Fremantle in 2002, to be part of the Victorian Maritime Museum. For various reasons, this project has not yet come about. At one stage the association tried to sell the Otama on e-bay – resulting in the interest of a foreign buyer, who was subsequently suspected of wanting to convert the submarine for drug smuggling! HMAS Otama still sits in Westernport off Hastings, as a curiosity for the moment, but who knows, it might eventually become part of a Maritime Centre as first intended.

After circling the Otama, its rusty exterior a burnished red in the setting sun, we turn back for Cowes on Phillip Island.

Our cruise heads back along the French Island coast, past the Tankerton Jetty, and perfectly timed for enjoying the setting sun.

The Twilight Bay Cruise takes one and a half hours. Included is captain’s commentary and fruit and cheese plate. Passengers can purchase wine and beer at the licensed bar. Soft drinks, snacks and tea and coffee are also available.