Also known as the Spiny Ant Eater, the Short-beaked Echidna can be seen occasionally on Phillip Island.

A Short-beaked Echidna on Phillip Island

Echidnas are monotremes, which means they are egg-laying mammals. The only other monotremes in the world are the Long-beaked Echidna (found only in Papua New Guinea) and the Platypus.

Small and solitary creatures, echidnas are covered in coarse hair and spines, and have a long, slender snout which is both mouth and nose.

Male echidnas have non-venomous spurs on the hind feet.

Echidnas can be active both day and night. They need to avoid heat, so in hot weather will come out to hunt at night. Their prey will probably be sheltering from the heat as well so will also be out at night.

Ants and termites are the main diet of echidnas.

With their large and strong claws they pull bark from logs, and dig in ant and termite mounds.

The echidna uses its sticky tongue, which comes out from its snout, to trap and collect its prey.

Ants are not the echidna’s only food - they also eat grub larvae, worms, mites, insect pupae and small spiders. 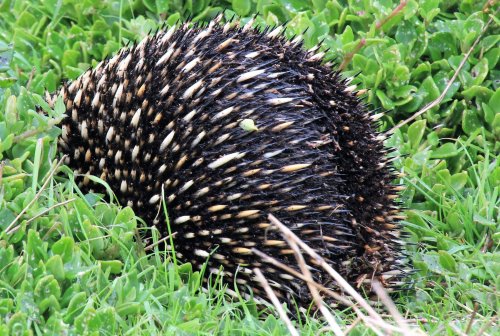 The Sharp Spines of the Echidna

When threatened they will roll up into a ball with just their spines protruding – very effective!

To breed, females attract males during the winter months, selecting one as its mate. A lone female being followed by several males is called an "echidna love train".

Twenty two days after mating, the female lays a single, soft grape-size egg and deposits it in her pouch.

The egg hatches after 10 days. The young echidna is called a puggle and sucks milk from milk patches as monotremes do not have nipples. The puggle stays in the pouch about 50 days.

Spines start to develop at this time. 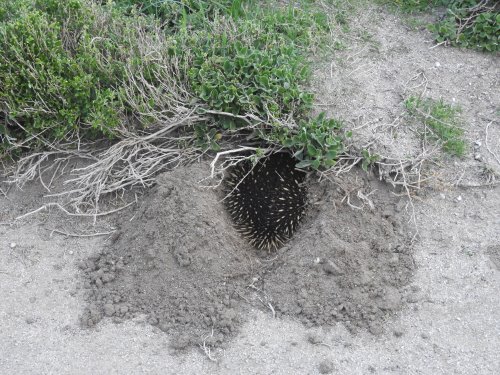 The mother digs a burrow and leaves the puggle there, coming back to nurse it every five days until weaning at seven months.

Echidnas live to a ripe old age – in the wild they can reach around 45 years, and even up to 50 years in captivity.