Wonthaggi To Cowes By Bicycle

We decide to go from Wonthaggi to Cowes by bicycle now that the bike path between San Remo and Anderson is completed, the last link in the trip.

Well, we actually cycle to Smiths Beach, Phillip Island, because that’s where we live!

We wait at the bus stop at Smiths Beach for the 7.46am bus. Because it is first in best dressed for the bike rack we hope that it isn’t being used already.

Luck is with us and the rack is ours! We put our bikes on – the driver can’t leave the bus so you need to do this yourself. A few days earlier we had checked out the rack at the terminus in Cowes so know how to attach our bikes. 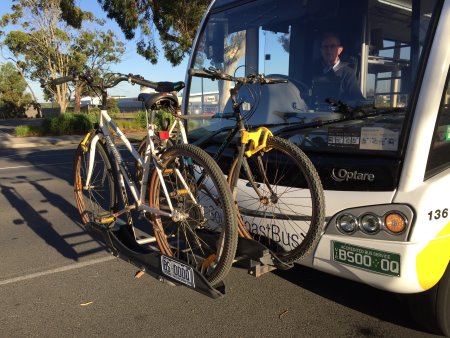 Our Bikes On The South Coast Bus To Wonthaggi

The bus ride to Wonthaggi takes ¾ hour. The only wildlife is a mob of kangaroos near Kilcunda – peeping above the long grass as we interrupt their early morning grazing in the cool air.

In the distance we can see the Wonthaggi wind turbines turning lazily in the breeze.

Cows stand in the paddocks after milking has finished.

The sun is low but the forecast is for a hot day.

When we arrive in Wonthaggi we fuel up with a coffee at one of the few coffee shops open. It is not yet 9.00am and the town is just starting to wake up.

To get onto the Bass Coast Rail Trail, the first section of our journey from Wonthaggi to Cowes by bicycle, we ride down Wonthaggi’s main street, Graham Street, past Guide Park and the hospital, and pick up the trail.

Nearly all the trail is comprised of fine gravel, with sealed roads or concrete paths in townships.

The trail starts in mostly shade. We cycle past Wonthaggi Wetlands, glimpsing spoonbills and egrets.

After about 5km we cross the Powlett River as it meanders through the flat countryside before it reaches Bass Strait. From the bridge there are good views over the grazing land towards the distant majestic wind turbines. The desalination plant can be seen just above a ridge – well hidden in the landscape. 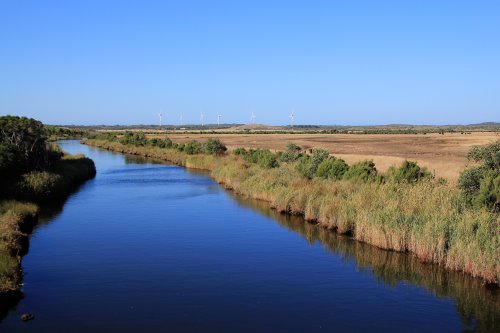 Disappointingly, although still early in the morning, we see no sign of wildlife.

Although marked on our map, we do not see any historic coal mining sites or the station remains near Dudley. This is possibly because the trail is mostly fringed with coastal bushland of paperbarks, acacia, banksia and eucalyptus, and there are no signs pointing out these places of interest.

Further on we see the dunes of the mouth of the Powlett River, then at the 12 kilometre mark, we arrive at the Kilcunda trestle Bridge. The 91 metre bridge was built over Bourne Creek in 1911 to carry coal from the Powlett Coal Fields.

At Kilcunda we stop at the Kilcunda General Store for a reviving cup of tea and cake. Remember to refill your water bottles here.

It takes us about 1½ hours to reach Kilcunda, cycling and also stopping to take photographs.

We are not yet halfway in our trip from Wonthaggi to Cowes by bicycle. 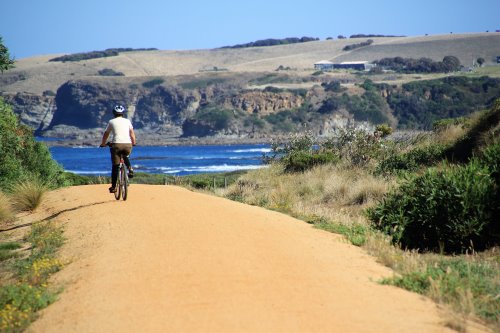 Approaching Kilcunda On Our Journey From Wonthaggi To Cowes By Bicycle

We are very lucky that we have the sun behind us as the day is warming up and the temperature will reach 30 degrees Celsius. Lucky too, that there is hardly any wind. Just a slight breeze now and again, so we aren’t riding into a headwind.

At Anderson we turn towards Phillip Island and the two steepest hills we need to climb.

I must confess I had to push my bike up both of them. Although steep, they are not long so don’t slow cyclists down. 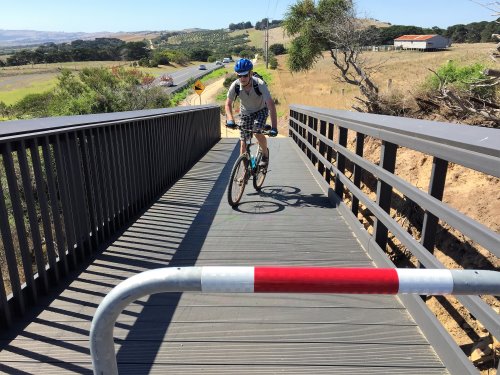 At San Remo the local service road becomes part of the trail. Be careful at the intersections in San Remo – there is traffic coming from several directions.

We cross the Phillip Island Bridge at low tide, the fishing boats tied up at the jetty and the pelicans being fed.

At the bridge approach at Newhaven we stop in the shade of a cypress and eat lunch sitting on the cool green grass.

As the temperature is rising and the sun is now coming from the side, we apply more sunscreen.

The rest of the journey across Phillip Island is fairly flat with just a few small rises. The only wildlife we see is at Surf Beach when a blue-tongue lizard slithers across our path and disappears into the grass beside the path.

We finish at Smiths Beach – a journey of 36 kilometres!

If you want to continue on to Cowes add four more kilometres.

The bike trail has taken us about 4 1/2 hours - this includes breaks at Kilcunda and Newhaven.

If you decide to do Wonthaggi to Cowes by bike, there are a few things to consider.

We rode from Wonthaggi instead of Cowes as we didn’t want to be constrained by the South Coast Bus timetable. If we had mechanical issues, it would not be as bad as we were heading home to Phillip Island. Plus starting at Wonthaggi, we weren’t riding into the sun. We were lucky there was little wind – westerlies or southerlies are the norm so you could be riding into a headwind if starting at Wonthaggi.

Toilets facilities are available at Wonthaggi, Kilcunda, Anderson, and Woolamai.

Note that for the bus trip, only two-wheel, single seat bikes with a wheel size between 20” (50cm) and 29” (73cm) and up to a 44” (111cm) wheel base can be loaded on the bus bike rack. Bikes weighing over 25kgs, motorized, electric or tandem bicycles, tricycles and small children’s bikes cannot be transported.

Wonthaggi to Cowes by bicycle? Try it!!