The Eastern Barred Bandicoot is an endangered species and has been listed as “extinct in the wild” since 1991.

The bandicoot was once widespread in the grasslands of western Victoria and across to the south east corner of South Australia. It numbers have been decimated by predators such as the introduced fox and feral cats, and the destruction of its habitat due to farming practices. 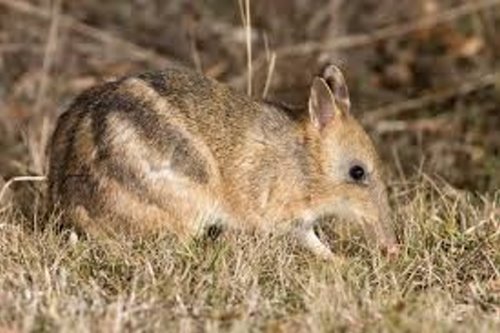 In Tasmania, the species is listed as “threatened” although still common in parts of the state.

Zoos Victoria began a captive breeding program and populations have been established in several predator-protected sites in Victoria.

In 2015, Zoos Victoria, with Phillip Island Nature Parks, released 16 (8 male and 8 female) Eastern Barred Bandicoots on Churchill Island as a trial to evaluate local conditions. The population now numbers about 120 bandicoots with only positive impacts for the environment.

Following this successful trial, 44 bandicoots were released on Summerlands Peninsula on Phillip Island in 2017.

They were released at dusk so these nocturnal creatures could settle in to their new environment.

"Victoria’s population of endangered Eastern barred bandicoots has passed a significant milestone and scientists have now declared they are on the way back from the brink of extinction. Researchers at Phillip Island Nature Parks stated that the population of 67 bandicoots released on the Island in 2017 has grown to about 300 animals.

The recent results of trap-and-release of microchipped marsupials also revealed the animals have spread at least 4km from their original transplanted home in the wild, including across farmland.

Phillip Island Nature Parks’ Deputy Director of Research Dr Duncan Sutherland said the project to establish bandicoots on Phillip Island has now met the key criteria of success after two and a half years.

“Successful establishment on Phillip Island is a huge step towards securing this species from extinction,’’ Dr Sutherland said. “We’re successfully reversing the decline.’’

The success of the program means that the Eastern barred bandicoots’ listing on the threatened species list could be reviewed in the future, Dr Sutherland said"

The hope is that this species can later be introduced into the wild in other parts of Victoria without the need for predator protection, such as fences.

The Eastern Barred Bandicoot is a nocturnal marsupial about the size of a rabbit. It weighs less than 2 kilograms and has a long tapering nose and large pointed ears. Its soft fur is grey-brown with pale bars across the hindquarters – hence its name.

Its habitat is grasslands and it lives in a grass-lined nest, usually in an area of trees and shrubs.

The bandicoot emerges at dusk, using its excellent sense of smell to locate food. It forages for insects and invertebrates such as crickets, beetles and earthworms, digging into the soil with its long nose. It also eats fungi and berries.

The female can produce up to 5 young in a litter. She has an amazingly short gestation – only 12 days. Juveniles wean at 55 days but stay with the mother for about 4 months. Females can have several litters a year but produce fewer in summer and stop producing during drought.

The life span of the Eastern Barred Bandicoot is less than 3 years.